Over almost three decades, gallery changes and storage moves had introduced errors to the V&A’s collections database. Pam Young, its Collections Documentation and Procedures Manager, describes how the museum audited and refined its location authorities to ensure visitors can find what they’re looking for.

The V&A has over 65,000 objects on display in its galleries and wayfinding is a priority. Visitors can find objects using maps, signage and our online collections database, Search the Collections, which includes the location of every object on display. All these resources not only need to be correct, but object locations need to meet the Spectrum 5.0 standard as well.

We faced several challenges in making sure our locations are fit for purpose. We’ve been using a collections database since the early 1990s and the first database was used for recording locations, but it was entirely free text, which allowed errors to creep in. These records were carried over and form the basis of our current location authority, which controls locations to room level. However, errors, duplicate records and unofficial names for spaces were also carried over, and some still existed, despite regular checks by collections management staff over the years. In addition, locations on public maps didn’t always match locations on CMS (our current collections management system) and we had locations on CMS which were obsolete due to building programmes, but had to be retained as location histories.

In 2016 we began to work on a full audit of the location authority. As we were moving loans management from a standalone database to CMS, loans out was an ideal place to start. Due to a lack of scope notes we had more terms for loan out locations than borrowers; by 2016 some locations had multiple terms and some terms were being used for multiple locations. Each venue was shown on Search the Collections simply as ‘on loan’. After a data-cleaning project, working closely with the loans section, the locations were clarified and given full scope notes. Now each online record shows where the object is on loan to.

In 2018 the collections management department began a project to data-clean the location authority. We began by removing obvious duplicate terms and we then agreed that every location, front and back of house, would be audited. Although this started as a desk-based exercise, due to the number of questions that were being raised, it became clear that a physical audit was needed. 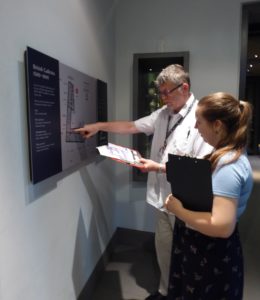 We aimed to ensure that the location authority had the right rooms on it and that the information CMS sent to Search the Collections matched what the public saw on maps. Any discrepancies we couldn’t fix were sent to the relevant stakeholders and no room was considered audited until we’d gained access.

After duplicates were removed, we found that over 50% of the front of house terms had some sort of error. These included obsolete terms still available for use, rooms which were incorrectly marked on maps, for example sub-divisions of galleries, and errors in staircase numbering. We spent the next few months sorting out all the issues.

We also appended front and back of house maps to our internal authority, highlighting the relevant space in each case. This is a small change, but it has made using the authority and identifying locations much easier for all staff.

While doing this we were able to ensure every room on the map had a matching CMS location and thus displayed correctly on Search the Collections. The gallery names were updated to include zones, for example British Galleries, and sponsor names were added. This information is online to aid navigation and matches how zones are grouped on maps. Finally, we also added full scope notes about the spaces, so staff can still search on those historic names that they remember without creating duplicate records.

Lessons for the future

Since completing the initial audit we’ve learned the lesson ‘don’t assume your authorities are authoritative.’ We’ll be doing annual checks of all terms and making sure everything is kept up to date. We have also ensured that the collections management department is closely involved in updates to public wayfinding.

The V&A will be opening two new sites in the Queen Elizabeth Olympic Park in 2023: the Collections and Research Centre and a new museum, V&A East. With these new sites we have the opportunity to take our knowledge from the last three years and ensure that locations are correct for staff and the members of the public who access our collections, and location controls are embedded from the very beginning.

This post is based on a presentation Pam Young gave at the Collections Trust Conference 2019.