Tyne & Wear Archives & Museums’ Women of Tyneside was highly commended in the 2019 Collections Trust Award, which recognised use-led collections management projects with strong community involvement. Manager of Collections and Research, Nick Hodgson, explains how the aim was to provide increased and more nuanced representations of women.

Due to collecting practices of the past, as well as Tyneside’s heavily masculine heritage, women were not represented within the collections of Tyne & Wear Archives & Museums (TWAM) to the same extent or depth as men. With Women of Tyneside, we set out to create our first ‘women’s collection’, combining contemporary collecting, oral histories, and new research and reinterpretations, along with pre-existing collections objects, to highlight and showcase both historic and contemporary women on Tyneside.

Alongside this, throughout all the community engagement work we undertook, we also wanted to encourage dialogue through our collections; empower and celebrate women; raise aspirations and challenge stereotypes; value the breadth of women’s identities; value women’s contributions to the programme’s design; and effect positive social change. 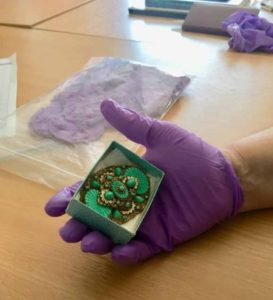 The project worked with a number of different women and girls across Tyneside to identify, reinterpret and share TWAM collection items, and ensure that their voices, opinions and experiences

For example, with the Women And Girls Going Strong (WAGGS) group in Benwell, an area of socio-economic deprivation, we explored activism and how they do, and can, make their voices heard, utilising items from the social history collections. The women worked with a textile artist to create contemporary versions of suffragette sashes, bearing slogans such as ‘Sisters Still Fighting’, ‘Women Against Violence’ and ‘Bleeding Inequality’ to reference period poverty.

The theme of opportunities and aspirations was explored concurrently with a group of Year 9 female students from Hebburn Comprehensive and older female members of South Tyneside Adult Carer’s Service (STACS). The girls explored photographs and representations of women to create their own digital artworks, either self-portraits or portraits of a female role model. The women from STACS each recorded oral histories on a seemingly ‘taboo’ topic to demonstrate issues that had helped or hindered their opportunities, inspired by objects from the 1960s.

Women from North Tyneside Women’s Voices explored the archaeology collections across several TWAM venues, and thought about historic power structures and the lasting impact on women today. They then acted as the editorial team to create a one-off new edition of the 1980s socialist-feminist publication Scarlet Women.

Public tours of TWAM’s costume collection were held for several months to address the theme of body image. Women who attended these sessions then formed a group which worked with an embroidery artist to create a dress that represented each of their feelings on body image, confidence and fashion. The dress formed the basis of a body image-themed exhibition held at Vane Art Gallery.

We also worked with women from Change, Grow, Live’s recovery service to reinterpret items linked to menstruation, menopause and mental health. While working with a singer-songwriter, the group produced three songs on these themes. The women recorded their song in a professional studio and performed as part of an event at a local music venue.

Women from Women’s Health in South Tyneside (WHIST) explored photographs of women in the social history collections, and considered female friendships and familial relationships within their communities. In response, they produced several drama pieces after working with a theatre company to share their own experiences.

The project also co-ordinated the region’s first Festival of Women events programme, with over 60 events taking place between March and June. The project itself hosted 16 of them, which were all inspired by the engagement work undertaken with the collections.

All the responses created by each group have been accessioned into the TWAM women’s collection to highlight that our objects can have lasting significance to local communities, and as a result of the project participants have reported greater self-confidence, pride in their achievements and greater empathy for others. Participant feedback has included, “Women have a lot more power than I thought and they have done way more in history,” “I have started to challenge sexist comments using my knowledge of women’s rights” and “I never thought I would have anything to contribute to the museum.”

Colleagues have reported changes to their working practices to improve the representation of women, and new documentation methods have been developed to capture and value public responses to objects. Participants have created 100+ object interpretations, breathing relevance and new life into collections. So far, 56 acquisitions have been made by directly to the Women’s Collection, including placards and protest items, period products and items from Dr Rachel Hawes, who pioneered life-saving procedures on the Great North Air Ambulance.

Image: A brooch presented to ‘Red’ Ellen Wilkinson, MP for Jarrow 1935-47. This object has been one of the most used, and most inspirational, items in the entire of Women of Tyneside project (courtesy of Tyne & Wear Archives & Museums).

We are moving our website to a new server. Our Shop and Newsletter sign up will be out of action for a couple of days, apologies for any inconvenience. Dismiss