Curator Belinda Scarlett describes how a documentation project had wide-ranging and long-term impacts, and enabled the National Football Museum to improve its representation of women in football.

The National Football Museum (NFM) opened in 2012 in the Urbis building in central Manchester. During its development the collections team recognised that the existing women’s collection was small, affecting their ability to produce permanent interpretation and exhibitions about female involvement in football. They made the decision to integrate these objects and stories across the display spaces. However, there were gaps in the narrative and to some extent this forced women’s history into the themes appropriate to the men’s game. This lack of representation within collections and therefore within interpretation and displays is a challenge facing the museum sector more widely.

To address this challenge, in 2015 the NFM purchased, with the help of a grant from the National Lottery Heritage Fund, a large collection of material relating to women’s football from a private collector. Although the collection was listed as containing approximately 500 items that were relevant to the NFM, the collection in fact contained 91 boxes of uncatalogued material. After purchase, although some box lists were completed, the collection lay uncatalogued at the NFM archive. Recognising that there wasn’t capacity within the existing team to catalogue and make the collection accessible, the museum successfully applied for an Arts Council Designation Development fund grant, which covered the employment of a part-time project manager and two part-time documentation assistants. 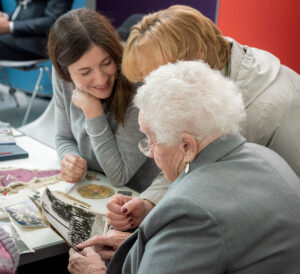 The documentation project took place over two years. I was seconded from the role of collections officer to manage the project. The project team catalogued 5,870 objects to basic Spectrum Accreditation standards using Modes Complete. Items were re-packed and given a location in the archive. The collection included a wide variety of material from the late 19th century to 2015, including photography, ephemera, kit, medals, posters and programmes, and was much more international than we had anticipated. We also carried out retrospective documentation of our existing women’s collection, improving Modes records for these objects and tagging each with concept and association terms, to allow better retrieval for staff and researchers interested in women’s history. Alongside this, we did a series of activities to increase access to the collection, including an academic conference, project blog and community activities. Although the focus of the project was on documentation rather than access, we could see the engagement potential within the collection.

The project has had an immediate and long-term impact on the museum’s work. Having a well-documented collection allowed the curatorial team to identify gaps and key stories, giving focus to collecting. We have been able to identify themes within our collection and make links between objects. As a result, we have improved our interpretation and are better able to challenge the traditional narratives of English football history, which have typically excluded women’s involvement and experiences. Having identified women’s stories, we were able to make links with the women’s football community, leading to opportunities to collect and co-create content. In 2019, this had a big impact on the re-development of one area of our permanent gallery, where we were able to increase our representation of women in football from 7% to 20% overall, and in some display cases we were able to reach over 40% representation. Chris Lockwood, project participant and England team member in the Mexico 1971 unofficial Women’s World Cup, commented, “I wouldn’t swap my experience for anything as it was so unique and will never be repeated again. I am extremely flattered that the NFM has shown our place in history and I hope it will inspire the young.”

The project, alongside other changes in the NFM senior leadership team, has had a long-term impact on our organisational strategy. In 2019 we launched our Game Plan 2019-2022, which states that we will increase our representation of women in football to 50% across our collections and exhibitions. We are using this strategy and our previous project as a basis to successfully apply for further grant funding. Our 50% representation pledge is informing our collections development and contemporary collecting strategies, and we are focusing on new areas of collecting and co-curation. We are also working towards a temporary exhibition exploring women’s involvement in football, which will open in summer 2021, and a re-development of an area of our permanent gallery, due to open in January 2021, which will explore the impact of the footballer Lily Parr on women’s football.

Although the grant-funded project was successful and well-received, integrating women’s football across the wider work of the museum has not been without challenges. There is sometimes resistance to the idea that women’s history and experiences of football should feature equally alongside that of men’s, and sometimes I have felt that women’s objects put forward for inclusion into the collection or exhibitions face greater scrutiny than would apply to similar objects from the male game. Having support from senior leaders within the organisation and having the 50% pledge written into the NFM’s strategic vision has been crucial in helping overcome these challenges.

Despite the challenges, we have learnt how giving collections staff time to focus on documentation projects and develop specialisms within the collection has wider impact. As my colleague, Kate Turner, noted, “I worked as a cataloguer on this project. It was one of the first ‘back of house’ museum roles I had and the opportunity to develop and facilitate a plan for documentation of such a huge and varied collection has been invaluable for me. To be able to focus so much time and attention on a collection like this meant that object stories and significant characters could be identified and explored for use in future programming.”

We have been able to reveal stories we would not have been able to tell before, helping to make the museum’s work more representative and relevant. Allowing existing staff to take secondments to manage projects like this allows the skills and knowledge to develop within the team, making an impact in the long term and making the outcomes of project work sustainable. As a result of the project and to help deliver our strategic aims, my role has been re-evaluated so that I can focus on the women’s game.

The NFM would like to disseminate its learning by working with and sharing ideas with other museums embarking on improving their representation of women’s history. I have spoken about the project at a number of conferences and we aim to produce a toolkit on making collections more representative within the next couple of years.

Images from the top: an event held at the NFM in September 2019 to celebrate Sporting Heritage Day; a bronze statue of Lily Parr, who played football in the 1920s, by sculptor Hannah Stewart – one of the NFM women’s football collection’s newest acquisitions – alongside a portrait of Eric Cantona by Michael Browne (images © NFM).

We are moving our website to a new server. Our Shop and Newsletter sign up will be out of action for a couple of days, apologies for any inconvenience. Dismiss