Emma Hadley, Museums Assistant (Collections) at the Hat Works in Stockport, describes how sharing its collections online using iMovie has been a great success – and an unexpected by-product of the Banish the Backlog cohort programme.

In July 2018 I started a part-time, fixed-term job tackling the backlog of donations to Stockport Museums’ hatting collection. The role was made possible thanks to funding from Museum Development North West (MDNW) as part of the Banish the Backlog programme, which staff from Stockport Museums had been attending in 2017-18 – and the HeadsUp! Project was born!

The reason behind this particular backlog was that when the Hat Works Museum opened in 2000 the public were called upon to enrich the hatting collection by donating objects which celebrated not only the town’s hatting heritage, but, because Hat Works is the UK’s only museum dedicated to hatting, those which represented the whole industry. Staff were inundated with donations, from hats and documents to photography and tools. 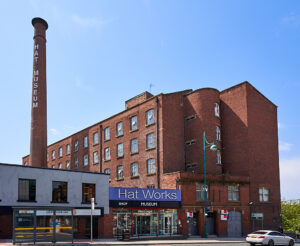 The Hat Works is one of six museum sites run by Stockport Metropolitan Borough Council under the Stockport Museums umbrella and, although we are still working through the backlog of donated items, thanks to the HeadsUp Project we have been able to make a huge dent in it.

In fact, so far we have added over 2000 records to our collections database and started a new inventory of the stores. The museum is currently closed to visitors, but it’s an exciting time for the Hat Works, because we have embarked on a re-development project and will open again in April 2021, to coincide with the museum’s 21st birthday.

While uncovering some of the not-seen-since-their-donation objects, or simply those which have been accessioned in the past but not added to Modes, I took photos and videos for use on my personal Twitter account, which the Hat Works was then able to share. As social media seemed the best way of telling people, including MDNW, about the project and sharing any exciting finds, I wanted to come up with a template that would work throughout the project.

I have hundreds of images of objects on my phone and I realised iMovie was pre-installed on there too. To bring life to the images and videos of objects, I had a play with the app, checked out the different options for sound effects, text animation and music, and started to create a template for Stockport Museums to use from thereon in.

iMovie is a good way of putting together both images and videos with further information about the objects and their stories. It’s quite user-friendly – you just click to add photos or videos, and there are options to cut and speed up. However, I do have a Post-it note on my desk (and a photo of the Post-it on my phone!) with the word order so I can keep the ‘branding’ the same each time! 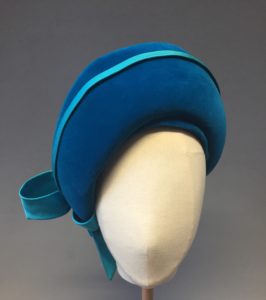 Sometimes if there is a trending social media hashtag or an anniversary I will find objects to post, but the longer videos mainly come from the objects I am documenting and the surprising things I discover. I am really not a technical whizz and I don’t have any experience of graphic design or creating digital content. I am more used to split-second snapping and sharing, so hopefully this encourages anyone to have a go!

I’ve made videos about all sorts of things – an opera hat, floral hat trimmings and a booklet used by a travelling salesman – and as they are made using my phone, I ensure that I download the videos to my work computer, so they aren’t lost. We have digital object files for objects on the Modes database record and the videos are saved here so they can be attached to the record in the multimedia section or found directly in the digital object folder.

There are, of course, other movie-making and video-editing apps available, but I just used what I already had. The pre-installed free music (or sound effects!) options are a good way of adding to your videos, but iMovie does have some limitations, so I but would be interested in seeing what other options are out there for future content.

However, the end goal is to use something relatively easy to put the videos together and not spend too much time on them (as there are a lot of other things that need doing!), while producing something which looks half decent and, most importantly, will catch the eye of the scrolling audience.

Here are my main tips (which I TRY to stick to): 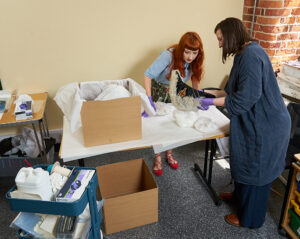 Overall, using a movie-making app has been an inexpensive and effective way of making more of our collections and sharing them online. By tagging them in the posts, videos and images we have been able to show MDNW what we’ve been doing with the role it funded, and we have been able to produce the numbers for interactions, likes and comments to show our management – none of which would have been possible if we hadn’t set out to banish the backlog.

I have also been given access to the council’s social media management software, so I am able to post social media content for the museum sites directly, rather than doing them from my personal or work Twitter feed and relying on others to share them.

My line manager, Museum Officer Bronwen Simpson, and I also used the videos in a talk about the HeadsUp! finds, which we presented to the public at Hat Works in June 2019, and MDNW is using them in a case study about the HeadsUp! Project at its 2020 conference in Manchester. You can follow the Hatworks Museum on Twitter or Facebook and you can read more about the HeadsUp Project, including the museum’s current redevelopment, on its own blog.