Gallery Oldham have been collecting and caring for varied objects, from historical items and artworks to natural history specimens, since 1883. In this guest blog post Gallery Oldham’s Collection Assistant, William Longshaw, tells us about an object that ‘came back from the brink’ during a recent collections rationalisation programme. 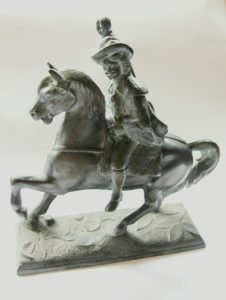 Until 2000 Oldham Museum and Art Gallery, as the organisation was then known, contained a reconstructed street featuring a variety of ‘shops’ and ‘interiors’ reflecting commercial life in the town in the early 1900s. When this display was dismantled, following the creation of the new Gallery Oldham, it left an enormous residue of largely un-accessioned material, mainly amassed in the 1970s and 1980s. Over the last twelve months, one of my jobs has been to assess this material and consider what deserves to be kept and what needs to be disposed of to give the museum the space to reorganise and grow its social history collection in a new off-site store. This work is part of an HLF-funded project to create a new Arts and Heritage Centre, which will include dedicated Social History and Natural History galleries, and a new home for fine and decorative arts, as well as Oldham’s Local Studies and Archives hub.

In addition to the more obvious items related to local industry and things like clog-making, chemists shops and pubs, there were a lot of mysteries; objects that we just got used to seeing on the ‘possible disposal’ shelves. One such item was an equestrian figurine. Viewing it from afar, I imagined it to be a knight, a king or perhaps some mythical figure. In other words, given that it had no entry form or marking, it was an object which would have been hard to sanction retaining. However, when I finally got round to looking at it properly there was something about the distinctive facial hair that struck me…could it be Buffalo Bill?

A trawl of the internet confirmed my suspicion and suddenly the object had a life. The horseman, made of spelter, was one of thousands of Buffalo Bill souvenirs sold while the showman took his Wild West show across Europe and North America between the 1870s and the 1900s. A visit to our local studies library revealed still more. Buffalo Bill, real name William Frederick Cody, toured Great Britain extensively during 1903 and 1904 and visited Oldham on October 7th 1904.

Buffalo Bill’s Wild West and Congress of Rough Riders, to give the show its full title, began to arrive at Oldham Mumps station at 1.30am on the morning of the performance. The tour required three separate trains, made up of 49 carriages and wagons in total; all required to convey no less than 780 men and 80 horses. A showground was established on the edge of the town with an arena lit by electricity, as the troop even carried its own generator.

Although the figure still has no definite provenance, we can at least imagine it being bought locally, as a souvenir of the amazing day when the Wild West came to town. It certainly now has the power to unlock a fascinating story and importantly, it has taught me that it is always worth taking a second or even third look at what is at the back of the store.

Gallery Oldham’s rationalisation and disposal work was linked to their participation in the ‘What’s in Store’ programme, run by Museum Development North West and Collections Trust.

Follow these links for further guidance on rationalisation and disposal.