This year’s Collections Trust Award recognised use-led collections projects and Time and Tide in Great Yarmouth, Norfolk, was highly commended by the judges. Seaside Heritage Project Officer Patricia Day describes how the museum transformed volunteers, many of whom were not regular museum-goers, into co-curators.

As part of the Making Waves Together – Great Places initiative, the Time and Tide Museum in Great Yarmouth sought to review and refresh its collections in order to broaden access to local heritage. The government’s index of multiple deprivation shows consistently high levels of poverty in the town and one of the ways in which this manifests itself is in low levels of cultural participation. The Handling Boxes project was devised to engage the local community, capture public interest and so promote a sense of well-being.

The aim of the project was to provide an opportunity for non-traditional audiences to play a real and constructive role in their own history by curating a series of fully accessible resources to recall the heritage of their town. The resulting collection of artefacts would then be available for use by, and within, the community.

It was crucial that local people took ownership of the project from the outset to ensure that their own expectations relating to museum collections were explored and, where appropriate, traditional policies challenged. It was anticipated that this user-led approach would result in collections which would reflect local interest and, in turn, make cultural heritage more relevant to a broader and more diverse audience.

The wider Making Waves Project works to support volunteer-run museums and increase access to collections across Lowestoft and Great Yarmouth. So far, the project has trained over 51 volunteers and engaged 1,740 participants, including 490 young people. The Handling Boxes themselves were conceived to be used either as an outreach resource or as the basis for a supported museum visit. The only specific requirement was that the finished product must represent the town’s population and be inviting to all, including those with differing physical, mental, intellectual or cultural awareness. 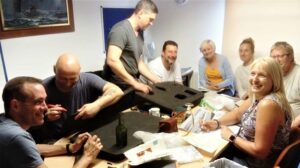 Consultation to shortlist collection themes began with local representative groups. The most popular themes proved to be ‘maritime’ and ‘seaside’. Members of Great Yarmouth MIND were the first to form a team of co-curators and they chose the maritime theme.  A group from Herring House Trust, a support hostel for recovering addicts, comprised the second iteration of the project, based around a seaside theme.

After introductory sessions to demonstrate good conservation, accessibility and presentation, the co-curators, many of whom had not previously visited museums, were given access to collections stores at Time and Tide Museum and to the Norfolk Museum Service object database. These insights into museum practice inspired and empowered the groups to explore and select objects which reflected their specific stories.

In addition to searching traditional museum collections, an appeal to friends and neighbours brought in other objects for consideration, including a vinyl LP of the Amazing Bavarian Stompers whom, we discovered, had been very popular entertainers in the town!

The co-curators also identified gaps in the museum collections. One had been a mod and a quick search revealed that this 1960s sub-culture, alongside the rival rockers, was not represented in the museum’s displays or archive. A public appeal added an original Parka, a rocker’s bootlace tie and several photographs from the period.

Additionally, outside the formal sessions, members used online sites to source and subsequently purchase further artefacts. Inspired by a seaside postcard, a single brass button from a tram uniform encapsulated the tourism in the town for one of the co-curators. He subsequently bid for the object and donated it to the emerging handling collection.

Some of the choices were surprising in their simplicity. For example, the maritime group wanted to include a sailor’s metal document tin, because the need to keep private documents safe resonated with them. Others were very personal. One of the seaside team retrieved a painting from a fellow squatter and was keen to include this as a piece of ‘people’s art’. We were able to reproduce this beach image and translate it into a raised profile representation for visually impaired users.

After selections for the Handling Boxes were completed, the co-curators began the task of packaging and labelling the developing collection. Further training sessions supported them as they researched, photographed and packaged the objects inside their distinctly individual carriers.

The legacy of Handling Boxes proved to be more than a useful handling resource. Early and meaningful consultation obliged museum staff to review and question their own preferences. Consequently, final selections included artefacts that truly reflected local choices and comprised objects that otherwise might have been overlooked.

The Handling Boxes include tactile objects and images, smells, sounds and different levels of notes, which make them accessible and approachable for the audience and facilitators. Specialist knowledge is not required, so the boxes can be used by non–professionals.

The co-curators have already presented the collections at public events, including Museums at Night and a regional mental health forum, and more outreach is planned. Some of them were interviewed about the project on local radio and their transition from minimal cultural contributors to positive museum advocates resulted in rising attendance as Handling Boxes progressed.

Their investment of over 180 volunteer hours has meant that the co-curators took ownership of the project and are keen to continue their involvement with the museum. By leading the Handling Boxes project, the museum has gained a new cohort of keen and able ambassadors who will doubtless inform future programming and collecting decisions.