When I joined the team at Alexandra Palace in 2015, the ‘collections’ referred to a small group of items used predominantly as a teaching resource for school visits. There were also some donations from the public and a lot of photocopies or printed reproductions of historic images.

Staff at the local Haringey archive at Bruce Castle told me that we should have the original plans for the second palace, bought at auction with a grant. Apparently, they were at Alexandra Palace in a ‘massive, locked filing cabinet,’ location unknown, so I started the process of trying to trace these missing items…

Our relationship with Google came out of a random, but serendipitous, conversation our Deputy Chief Exec had at a tech-focused Women in Business event. Early in 2016 a meeting was arranged with YouTube in their offices at Holborn and we rehearsed meticulously. Initially we hoped for funding or in-kind support for our digital interpretation of the historic BBC Television Studios, based on the concept of a ‘ghost in the machine’ and with the aim of forging links to the YouTube generation through interactive media.

However, it quickly became evident this wasn’t Google’s area of interest and at the last moment we changed tack to heritage digitisation. Listening to what they were excited about and trying to understand their priorities was key. One of the scariest realisations for me was that our timescales are so different – the whole landscape changes at a pace that makes committing to anything beyond the next six months impossible. We had to be open-minded, flexible and agile – not exactly what the heritage sector is renowned for!

Discovery of the ‘lost’ archive

During enabling works for the East Wing restoration project, contractors came across an unopened cabinet in a disused mezzanine floor room of the BBC tower. No-one had a key so we had to break in. What we discovered that day astounded us all. In the cabinet there were: 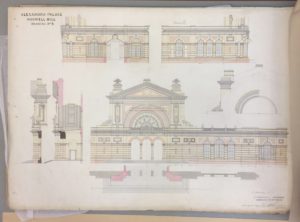 My immediate priority was to find adequate storage. Assessment of the collection was undertaken by an NCS conservator. Treatment was arranged to stabilise the oldest drawings and designs for digitisation, with the aim of documenting the collection and rehousing the most at risk sections of the photographic archive to preserve them. 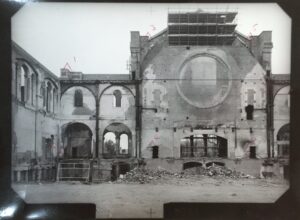 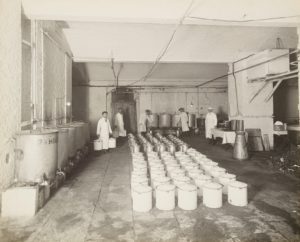 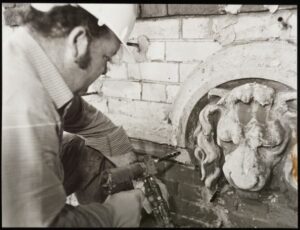 I requisitioned a lockable safe where the valuable and fragile items could be kept under strictly controlled access, and in the short term I provided supervised viewing of materials for board members and staff. Until the archive could be conserved, documented and rehoused, we decided that digital access was the lowest risk way of providing the public with an opportunity to engage with this historic find, and we focused on strategies to minimise the damage that could potentially be caused by handling, unsuitable storage materials and environmental conditions.

We also knew the best way to maximise the potential impact of this archive was to commission a collections management system –the only snag being that all this essential work was completely outside the existing project scope and budget! I had some sleepless nights, but fortunately our new partners at Google saw a golden opportunity and got excited about the idea of opening up this discovery for a worldwide audience through their Arts & Culture platform.

Within a matter of weeks we arranged logistics, prepared a room, drafted agreements, scheduled the work and recruited a small volunteer team. Google shipped the high-resolution scanning equipment to the Palace from Germany and they also provided a professional photographer to operate it! With a great deal of help across the staff and from diverse friends of Ally Pally, over a three-month period we managed to digitise the majority of the newly discovered archive, along with material from local historical and Alexandra Palace societies, and private collections, lent to us for the purpose of collating a digital archive, all at no cost, thereby saving the Trust an estimated £50,000.

All the scans are stored on the Google cloud platform as well as on a hard drive given to the Trust. With our limited resources it wasn’t possible to catalogue simultaneously and the metadata we were able to upload at speed still needs a lot more work. However, by 2 Nov 2016 and the launch of our Google Arts & Culture platform to celebrate the 80th anniversary of BBC Television, 521 digitised items went ‘live’ along with three online exhibitions. 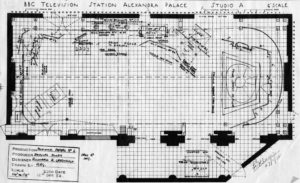 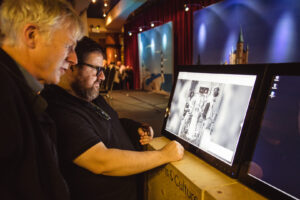 Building the first nine of our Google Arts & Culture stories was brilliantly executed by our consultant curator for the East Wing restoration project, James White. He knew the most important stories we wanted to tell, had been intimately involved in the digitisation of all the assets and had mastered the system quickly. The process is not unlike putting together a physical exhibition, you just have to be much more economical with words and keep it snappy! In fact, creating more inclusive content – learning to select engaging images and media that help to put across complex ideas with little text – is a useful discipline for the times.

Exhibits of three areas in the Palace using 360-degree scanning – the Great Hall ‘Rose’ window and Henry Willis organ, and basement cell – were added in 2017 and further online exhibitions enriched the site over the next two years. The total number of digitised records captured is well over 8000, and now includes the large plans, posters and magic lantern (glass) slides which required specialist scanning equipment.

The functionality of this collections management system and ease of use to build exhibits (simply drag and drop) is continually being improved by Google, and we are currently working on the next theme for autumn 2020. Although Google’s metadata sheets (CSV) might be rudimentary when compared to traditional museum systems, they provided a great starting point for our organisation, which had no such infrastructure in place.

Future of the archive

There is a rich seam of potential for on-site and online interpretation of the Palace and Park’s 150-year history, and, as I work from home in these challenging times, I realise heritage and collections have an even more important role to play in our communities as stimulus for collaboration, creativity and unity.

This new area of work and responsibility for the Trust was completely unforeseen, but we continue to look for sustainable ways to enable relevant collections to be brought together, researched and curated for the purpose of increased public access and education, and longer term aspirations for the AP Archive include creating an environmentally controlled archive and collections store on site, so watch this space…

Images (from the top, left to right): a Picture Page drawing of BBC TV producer Cecil Madden as a Roman emperor by artist Harry Rutherford; an 1874 drawing of the Great Hall Entrance to Alexandra Palace by John Johnson; a building in need of renovation; the basement being used as a milk store; work on a stone lion; 1952 floorplan for BBC studio A; and celebrating the 80th anniversary of the world’s first regular TV service in 2016 (all © Alexandra Palace Archive/Alexandra Palace Television Society/Kirsten Forrest).